A rock musical charity gala night, at a brand-new drive-in theatre in Manchester in June, will raise money for Kidscan Children’s Cancer Research.

As this last year has been hard for everyone, it has been uniquely bleak for the theatre industry and the audiences who love and miss live shows. The musical ‘Fallen Angel’ was written by Sara and Giles. Like many artists, actors, musicians and backstage staff, they’ve found 2020 a testing time. 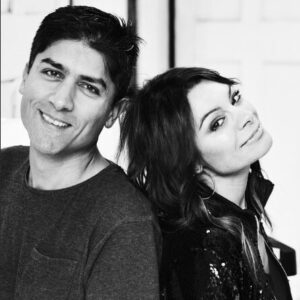 “Yes, this has been a very difficult year for everyone. As you say, theatre has been hit particularly hard. We were working on a new musical down to March 2020, and then suddenly everything came to a standstill. Many people have experienced financial hardship and have had to put their creative professions to one side for a year.

One positive though, is that the theatre industry has done a lot of self-reflecting over the past year, and many people are looking at ways of reimagining theatre in a way that is more diverse and inclusive. Drive Inside’s vision is part of that new direction for theatre. It’s funny really to think how our theatre tradition has developed over the past few thousand years, because it’s only very recently that we’ve had this idea that theatre has to be in a building with four walls and a roof, and enjoyed in quite a detached way. In early theatre it was of course all outdoors, but more than that the audience were often part of the show. Shakespeare’s plays were much more accessible 400 years ago than they are today. And that’s not even considering the wealth of different theatre traditions around the world. Although there have been many difficulties over the past year, this collective reflection on a new type of theatre has been a positive development.

We are absolutely committed to taking theatre to new places and reaching different audiences. Theatre can often be elitist, and we want to break that down, both in terms of audience and in terms of who appears on stage and the stories they tell. Storytelling is one of the things that we share in common across race, class, religion and that needs to be made as inclusive as possible. It’s stories that lift us in difficult times. Sometimes accessibility can just be about the types of story you choose to tell.

We’re also very keen on using language and music that is accessible. Sometimes the elitism of theatre can creep into musicals too, and we are always focused on breaking down those barriers. There’s actually a joke about that in Fallen Angel, when Keeley and Zach are writing a song together, we wonder how many of the audience will get the joke. Our backgrounds are in pop music (Sara) and in playwriting (Giles), and while we are now concentrating full-time on creating entertaining and engaging musicals, our backgrounds give us the language to create work which potentially appeals to a wider section of society. 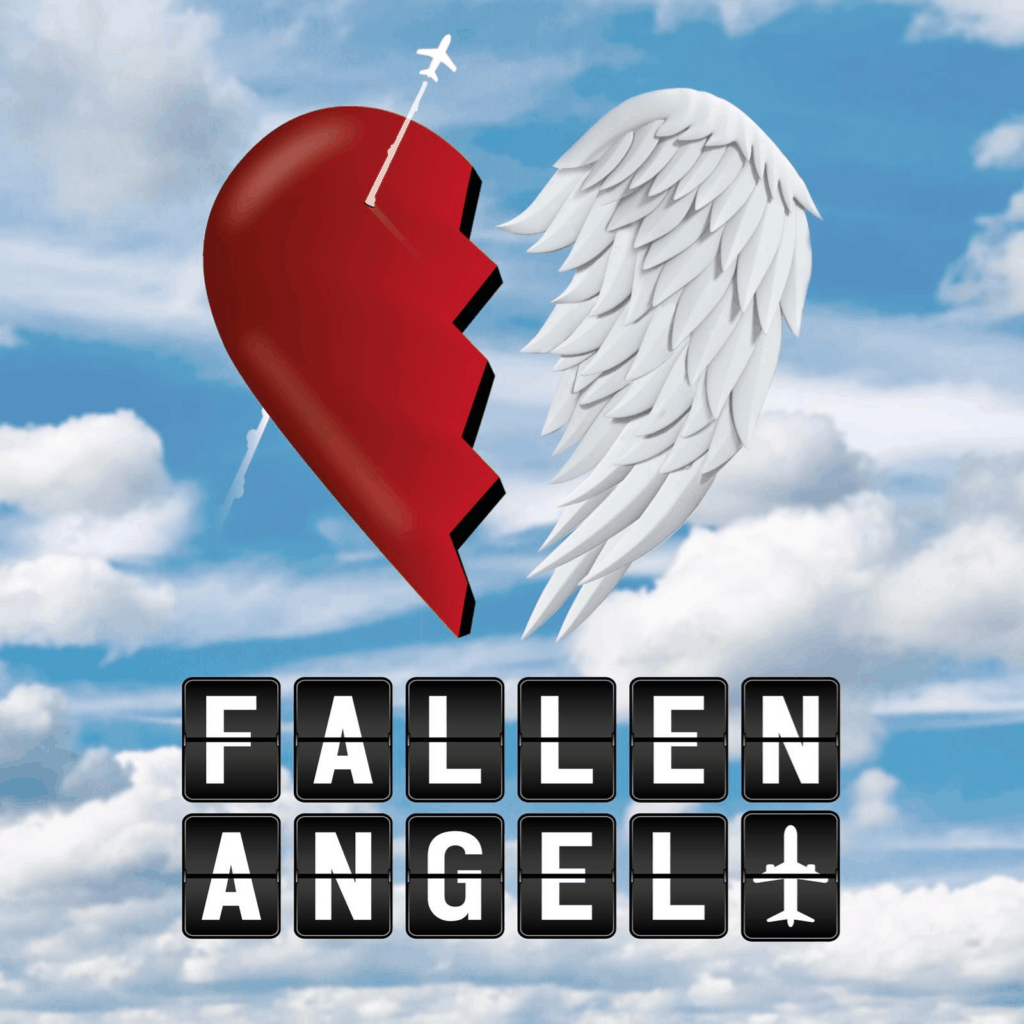 Sara and Giles work together during the creative process and have come up with a story and characters they hope everyone will relate to.

“Fallen Angel is a story about love, failure, and overcoming loss. It’s partly that age-old question of how far would you go for someone you love? What would you be prepared to sacrifice? It has a strong resonance for the time we’re living through, when so many people have had to confront unexpected loss. For us, it’s about how to love, and also how to let go positively.

Sometimes when we’re writing, we’re not exactly sure what the story is about, just that we both feel a strong need to tell the story. Only at the end of the process can you begin to analyse what the story means for you, and why it resonated so strongly. We both had experiences over the past few years where family members were close to death, which filtered into our writing, and we both came out of difficult relationships where we wanted to move on while still celebrating the time we spent with people we loved.

In Fallen Angel, Keeley, the angel, is masquerading as a musician. Her assignment is to take failing musician Zach to his death, by getting him on a London-bound flight that goes missing. All Zach has wanted his whole life is to write one hit song. Keeley knows that Zach will write a hit song with her, in the departure lounge, but will not live to hear it be a hit. That strikes her as so unfair, and she decides that she can’t let Zach get on the plane.

So, she breaks her angel vow and tells Zach the plane’s going to disappear. Zach thinks she’s crazy, and boards anyway. Keeley then battles her Boss to save Zach’s life, but Boss refuses to let Zach live. Angels who defy the Boss and change history lose their wings. So, she’s faced with a stark choice: her immortality or Zach’s life. And to find out what happens, in the tale of star-crossed lovers, you’ll have to buy a ticket to the charity gala …

We always knew we wanted the characters to be musical, because we wanted them to interact creatively during the show and we wanted the show set in real-time, so we needed a setting where characters might be stuck for 90 minutes. The airport seemed to fit, with that sense of being trapped but maybe moving onto something better. People in airports should be elated, as they are about to travel, on holiday or to see family, or for a work trip, but something about airports creates an unusual tension. It makes for great drama. Obviously, all creative people can empathise with a struggling musician, but really Zach’s character has a much broader appeal. He’s trapped in the past, and he’s petrified of failing. Zach’s journey is one we can all understand, learning to let go of your fears and jump into the unknown. Both characters have to deal with the pain of loss in the show, and we hope that the musical gives people strength and is uplifting even though both characters face anguish and adversity.” 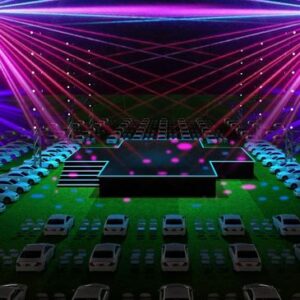 How to Drive-in Theatre:

The Drive Inside performance venue at The Trafford Centre, is designed to be ‘covid compliant’. With a huge open-sided tent roof there will also be social distancing measures in place so that the 800-capacity audience can safely enjoy the show from inside or next to their cars in designated seating areas.

As this is a unique space and experience for audiences, we wanted to know if the writers had to adapt this musical specifically for the venue?

“Yes, absolutely. Drive Inside champion immersive theatrical experiences and our show will be tailored to the venue. It’s set in an airport, and so people will feel that they’re on a journey from the moment they arrive. A ticket check and security check at the venue mirror exactly what happens when you get to the airport, and the ushers will be dressed as cabin attendants so people will have the full experience of being at an airport waiting to get away.

We’ll also use the space for a charity auction to raise money for Kidscan during the night. It will be a wonderful evening where everyone can be entertained and do great things for Kidscan.”

A Powerful Gift to Charity:

Sara and Giles wanted to pay something back with the charity gala and chose Kidscan Children’s Cancer Research Charity to contribute to, because of an element in the Fallen Angel story:

“Without wishing to give too much away, in Fallen Angel, one of angel Keeley’s big regrets is that she wasn’t able to help a child who had cancer. She wears a locket with the inscription “Smiley Boy” as a reminder of him. Her memories of the young boy and her feelings of regret and powerlessness are part of the reason she is spurred to help Zach, the failing musician, when he is going to die. She summons the courage to help him fulfil his dreams, and to challenge her Boss.

Like Keeley, we often feel powerless in the face of children’s cancer. Organisations like Kidscan that are researching cures for children’s cancers give us hope, and help alleviate that feeling of powerlessness.

Supporting an organisation that researches cures for children’s cancers was a natural step for us, and it is our absolute privilege to be able to support Kidscan in this way. We’re so pleased that Drive Inside agreed to donate the venue and their producing expertise too to support the cause.

Now all we need is you the audience; so, get your tickets, have a wonderful evening and support a fantastic cause.”

Giles Fernando is a playwright; he’s won HighTide/IdeasTap, writer-on-attachment at the Oxford Playhouse and shortlisted for the BBC3/Hive and Adrian Pagan Awards

The Venue: Drive Inside, Trafford Centre, Manchester has been created by Beyond Theatre Ltd, more details here

"With Spring officially sprung we are launching a challenge for businesses to promote physical activity: encouraging employees to take time away from their desk to get some...

We are very excited that Kidscan-funded research into new treatment for children’s cancer, has been published in...