In September 2019, Kelvin Wood was selected as our only runner in the 2020 Virgin London Marathon after his emotional application won the hearts of the Kidscan team. But as Coronavirus swept across the world, the news came that the London Marathon had been postponed.

This is Kelvins story.

Last year Kidscan was awarded one place in the London Marathon. With demand high we welcome applications from across the country with one standing out.

“Over the last 10 year I have raised money for different charities in memory of my Dad who sadly died in 2010. We were keen fundraisers and did lots of different things through my singing. When the opportunity came up to support Kidscan I felt I wanted to do something for children with cancer and so applied”

”When I got the call to say I had been selected as their runner I was overwhelmed. It really was a dream come true. It also came at the right time as my good friend Joe Longthorne had recently passed away and I had just attended the funeral of my auntie, so emotions were high. Being offered the place, really was emotional and the uplifting news I needed. 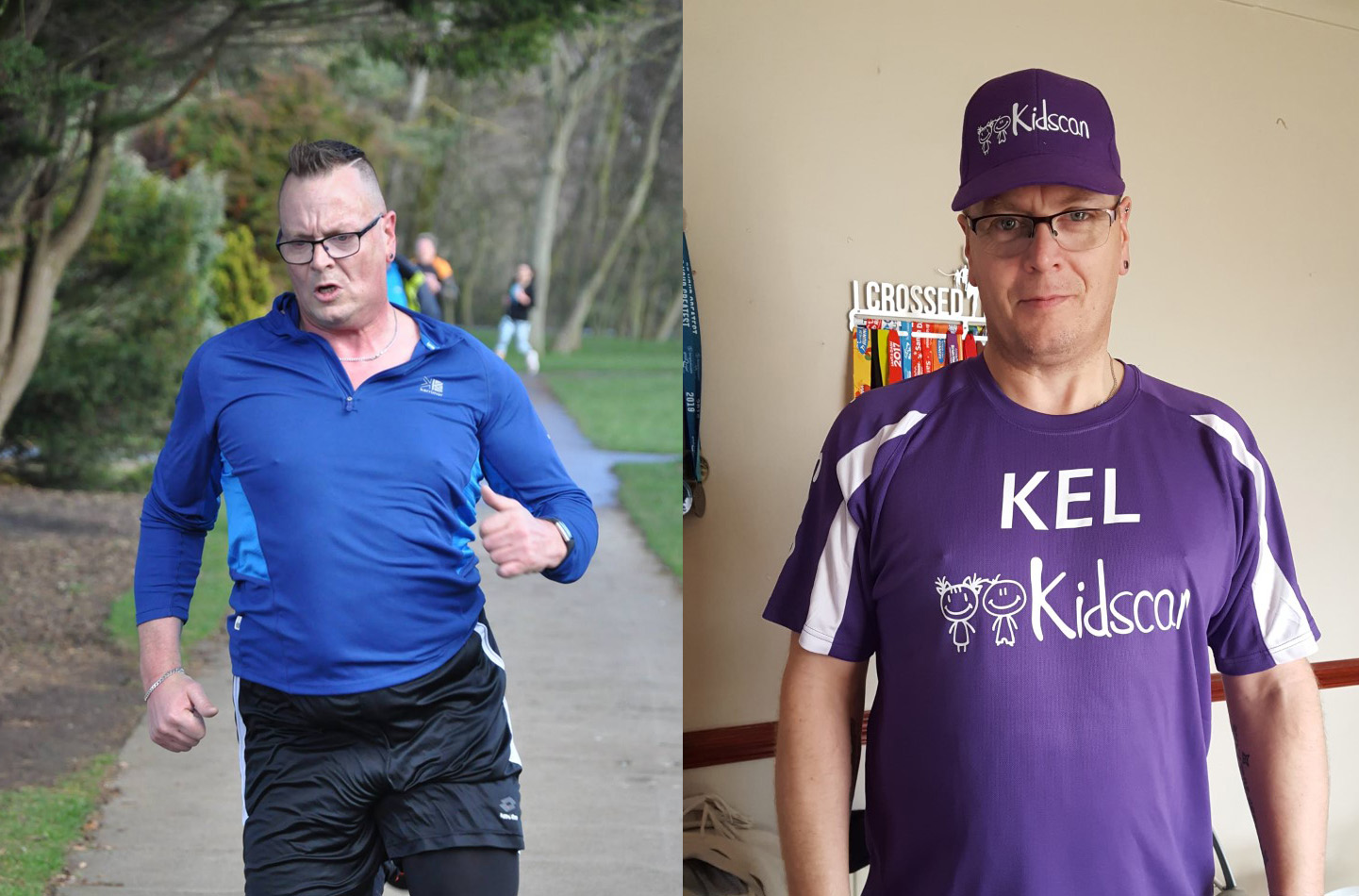 Within just 4 months Kelvin had doubled his fundraising target of £2000 through sponsorship, his gigs and his “2 quid for a Kid” campaign. “People were incredible and generously donated £10 & £20 notes, it was unbelievable how supportive people were. Also, the messages of support have been wonderful!”

But sadly, with the outbreak of Coronavirus, the news came that the London Marathon had been postponed to October, leaving those taking part with the tough job of staying motivated during lockdown.

“When I heard the news I was gutted to be honest, but on the bright side it’s given me more time to train and you can always do with a bit more training even if you’re at the top of your game.” 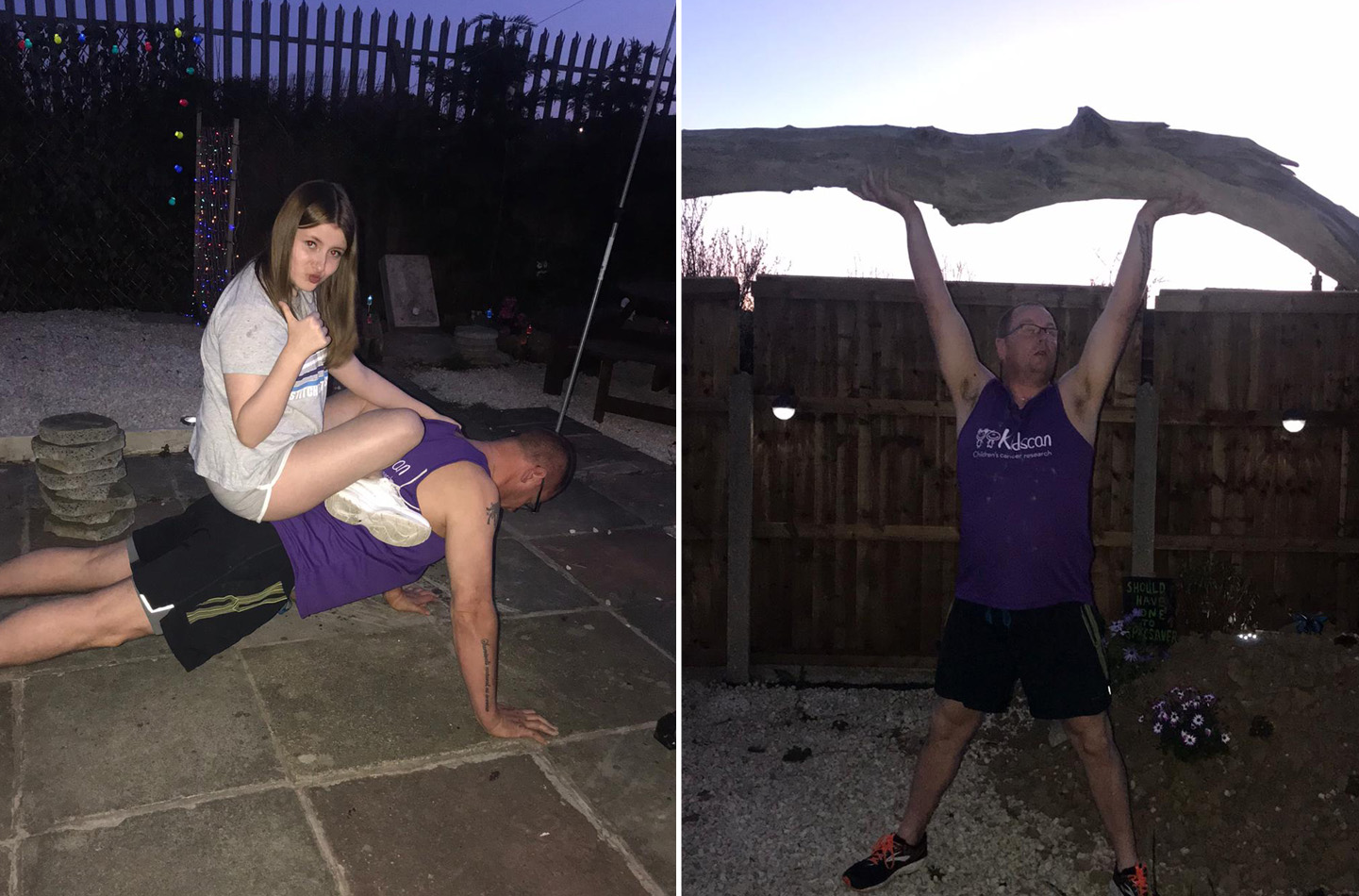 “The lockdown has made training a little bit more difficult. Obviously the gyms are not open to do the gym work I was doing, but I’m still getting out running regularly and I’m doing bits in the garden. I’ve got my exercise bike set up and doing it the old fashioned Rocky way with a tree trunk!”

Regardless of lockdown, Kelvin is still looking forward to taking part in this years London Marathon. “Running this year’s marathon does mean more to me than other ones I have done because I have met the patient Ambassadors at Kidscan and they have been through so much it just makes it more important to me.” 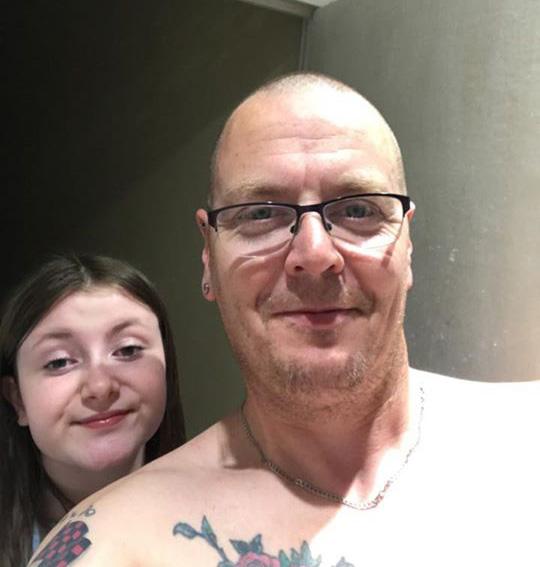 But the story doesn’t end there. Aside from training and looking forward to the marathon Kelvin has also been using his time in lockdown to raise money for Kidscan, with his most recent fundraiser raising over £100! “I’m very proud of my hair and was thinking I really need a cut but the barbers’ are shut. I’ve never thought of having it shaved, but I’ve watched people online do it and I thought, if I’m going to do it, now is the time to do it”

Alison England, Community Fundraising Manager at Kidscan said “The team at Kidscan can’t thank Kelvin enough for everything he has done. The money raised to date is enough to fund over 400 hours of vital research, which in these times is more important than ever.”

“Often because of the harsh treatments used, children going through cancer, and many of those who have survived can be more susceptible to viruses like Covid19. The research we fund with the donations from supporters like Kelvin will help us to find safer treatments so children don’t have to worry about things like viruses during or after treatment”

“The team at Kidscan are overwhelmed by Kelvins dedication, so after a zoom call the other day we have all decided to take part in the 2.6 challenge, to not only raise money for Kidscan but also show our support for Kelvin”

The 2.6 challenge will take place on the 26th April, when the London Marathon was originally scheduled. The campaign aims to help UK charities replace the money usually raised by participants, which last year reached £66.4 million. To get involved visit: https://twopointsixchallenge.justgiving.com/