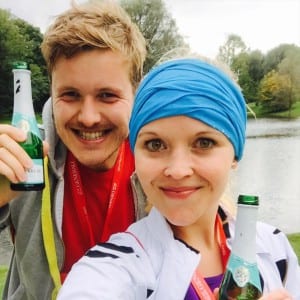 We’d like to say a massive thank you to Alastair Bealby, who ran the Munich half marathon to raise money for Kidscan in memory of his friend Martyn Hett, who sadly passed away in the Manchester bomb.

Alastair began his training in July 2017 with a fundraising goal of £1000. After months of training, and fundraising he has since smashed his target.

After his run Alistair quoted “I am absolutely thrilled to have raised £1,800 and counting for Kidscan, a charity that will always mean a lot to me. After my dear friend Martyn Hett died in the Manchester Arena attack, I was searching for something positive to do in order to carry on his legacy, so it made sense to fundraise for Kidscan, a cause that was very close to Martyn’s heart. Whilst of course it was his job to work on the charity’s public relations, he really put in the extra mile to help spread the positive messages of hope that Kidscan puts out. It was the support and kind messages of people that gave me the impetus to train and make it around the 21 km course.”

No more than 24 hours after completing the half marathon, Alastair decided he will take part in the Manchester Marathon alongside friend Neil Byrne to raise even more funds for Kidscan in Martyn Hett’s memory.