Ambassador shaves her head for Kidscan

Laura Mills is a Kidscan ambassador and a childhood cancer survivor, she was diagnosed with acute lymphoblastic leukaemia (ALL) when she was just 16 years old.

Now in her mid-30’s, Laura is living with late effects caused by the treatments used to save her life. After the initial course of intense chemotherapy Laura was suffering from seizures and doctors discovered the leukaemia had travelled to her brain. Laura then needed total body irradiation followed by a bone marrow transplant.

After her cancer journey appeared to be over, Laura began developing health problems through her 20’s linked to damage caused by the chemotherapy. She suffers from migraines, requires a wheelchair due to acute poly motor neuropathy, has been diagnosed with chronic pain, calibre fibre neuropathy (a degenerative form) and suffers from migraines. 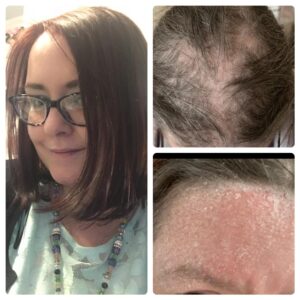 At the beginning of lockdown 2020 Laura started to lose her hair, patches at first but gradually it got worse and her scalp is now very sore and flaky. Doctors conducted a scalp biopsy but no cause has been determine. Laura believes strongly that it is another late effect of her cancer treatment.

Laura says she was ok through the winter as she wore a hat but as the summer approaches, she feels the better option is to shave her hair off. Laura takes up the story:

“Hi most of you know I took ill with leukaemia at 16 and since then I’ve had a lot of health issues. What you may not know is that this is due to late effects from the chemo. This past year I’ve had a new late effect and it’s brought me here. During lockdown my skin on my face and scalp went ridiculously dry and then I started losing my hair. I’ve had a scalp biopsy but so far no answers and now I’ve decided to shave my head and why not do it for a charity that means the world to me? Kidscan are a charity that are doing research into new and improved treatments for kids with cancer so they won’t suffer late effects like myself and most of my friends have.”

Alongside wanting to raise money from this unfortunate development to support Kidscan’s research into new, gentler treatments, Laura is keen to raise awareness of this particular late effect. She wants to help patients, clinicians and researchers build on their knowledge of late effects so they can be better equipped to treat it.

So far Laura has raised £213 so if you’d also like to show your support, you can donate on her Justgiving page here or directly to Kidscan here.

Meanwhile Laura is waiting for her wigs to arrive, she ordered four in different style so she can pick and choose what she likes. She hopes she will be able to treat her scalp better once the hair has been removed and this will help with the dryness. Unfortunately, the skin on her face is becoming the similar to her scalp which is quite stressful, so she is trying to treat that too.

From all at Kidscan, we wish you all the best and applaud your ability to turn a tough situation into one of positivity and thinking of others. Thank you hugely for your continued support Laura x

Alison England, our Community Fundraising Manager, was finally released out into her natural habitat; to work with our supporters...

Alison England, our Community Fundraising Manager, shares a fun way colleagues have been doing their bit.  "At Kidscan we...

Today, five years on from the publication of a Parliamentary Committee’s report in 2016, MPs will again hear...